My friend Gina is always ahead of the game...whether it be fashion or makeup or hair, the girl is without a doubt a trend-setter. So, it came as no surprise when she told me about her recent business venture...WHOOPIE PIES! Oh yes, ladies, cupcakes are SO last season, Whoopie Pies are where it's at!!!

Gina was roped into the kitchen at a young age by her mother...as she grew older she started to appreciate and actually love bake!  As a recent SAHM she wanted to be able to do something from home that gave her the time to give her darling son quality time as well as do something for herself that she loves. And that is how Whoop.De.Do came to be! Isn't that the cutest name ever? 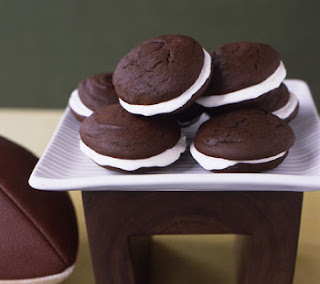 
If you don't know what a Whoopie Pie is, her is a definition courtesy of Wikepedia:

A whoopie pie (alternatively called a gob, black-and-white, or bob) is a baked good made of two round mound-shaped pieces of chocolate cake, sometimes pumpkin cake, with a sweet, creamy frosting sandwiched between them.[1] While considered a New England phenomenon and a Pennsylvania Amish tradition,[2] they are increasingly sold throughout the United States.[1]According to food historians, Amish women would bake these and put them in farmers' lunchboxes. When farmers would find these treats in their lunch, they would shout "Whoopie!"[1]


And let me tell you, they are absolutely fabulous. She gave me 2 of her Banana and Nutella filled


Whoopies...one was supposed to be for my husband. I had one and guess what? It was so good that I ate


2nd one too!!!!! They are super moist and the filling is light. She has the following amazing flavors


currently, with more to come...

so, if you want to be ahead of the trend, contact Whoop.De.Do "Makers of Fine Whoopie Pies" to bake up some for your next special event!!!

Congrats Gina, I am so happy for you!!!