A friend of mine told me I must see Bill Cunningham New York, a documentary about the famed New York Times fashion photographer. I have to be honest, I knew nothing about the man except that he was was legendary and the very first "street style" photographers of our time. 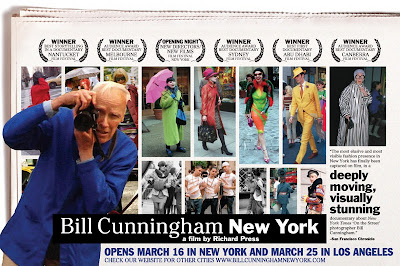 So, one night when my husband was watching the World Series I got a bowl of popcorn (Lime and Seasalt by Orville Redenbacher...it's so good, you must try it!) and tucked in for the show. Immediately I was drawn in...what a fascinating man with an unbelievable story to tell. 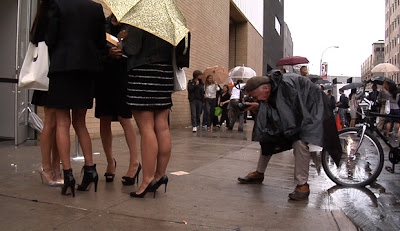 Here is Bill, on a rainy day photographing shoes...

I could not believe that this tiny 82 year old man rides around on his bicycle (rain, snow or sleet) snapping models, socialites, charity events, fashion shows, or just anonymous people on the streets of NYC. Anna Wintour says in the movie, "We ALL dress for Bill Cunningham". 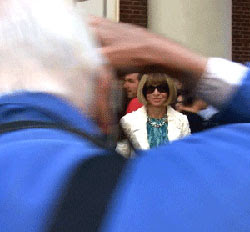 I could ramble on and on about the documentary and how inspiring and lovely it was, but I don't want to spoil it for you. Just do yourself a favor and rent it, you won't be disappointed.
Posted by Unknown at 9:16 PM